You are here: Home1 / Blog2 / Business Management3 / How Well Do Australians Protect Their Online Security and Privacy?

Ever seen your hipster mate on Facebook gush about how talented Justin Bieber is? We’ve often laughed at friends who’ve had their social account hacked as part of a harmless prank. But is this a symptom of a wider problem? Perhaps there are many of us who are leaving our social media accounts vulnerable to much more sinister attacks on our privacy and security.

Melbourne based SEO agency Optimising conducted a recent survey to attempt to find out how educated Aussies are when it comes to protecting their online social profiles. The team surveyed 853 adults across the country earlier in 2015 and asked respondents whether their profiles were public or private, if they’d had their data or personal information shared against their will, as well as their knowledge of some common privacy related technologies.

The results suggest that many young Australians are leaving their Facebook and Twitter accounts exposed for anyone to view. This hasn’t been without consequence either, a massive 1 in 5 respondents revealed that they’d had their Facebook account hacked! To add to this, more than a quarter of respondents who used Snapchat reported that they’d shared an image they later came to regret.

Results of the survey were used to create an infographic, courtesy of Murbu Design.

So how well are you protecting your online identity? See you compare to the rest of Australia in this infographic. 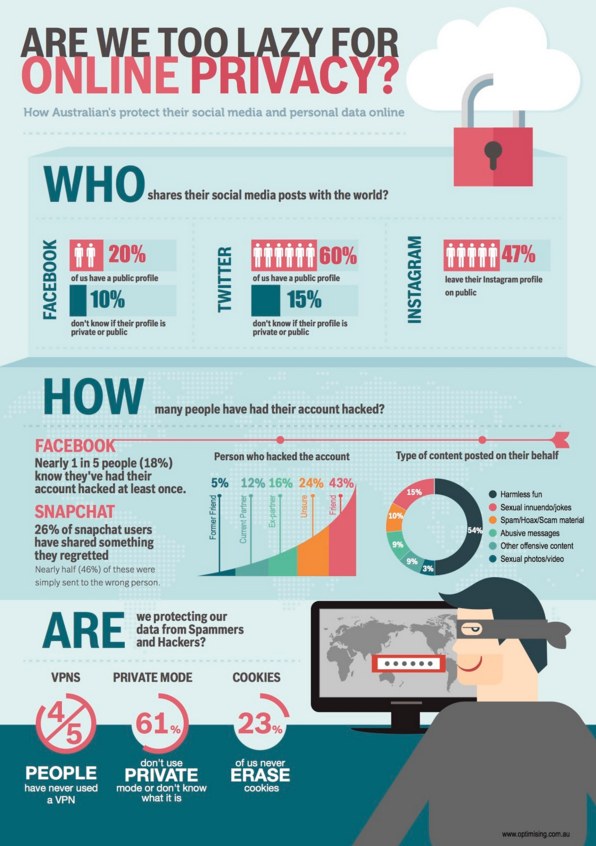 Data Security In The Age Of The Mobile Worker

Top Tips when Working with Family Members
Scroll to top