You are here: Home1 / About Us2 / In the Media3 / Ticker TV Interview – Website Design 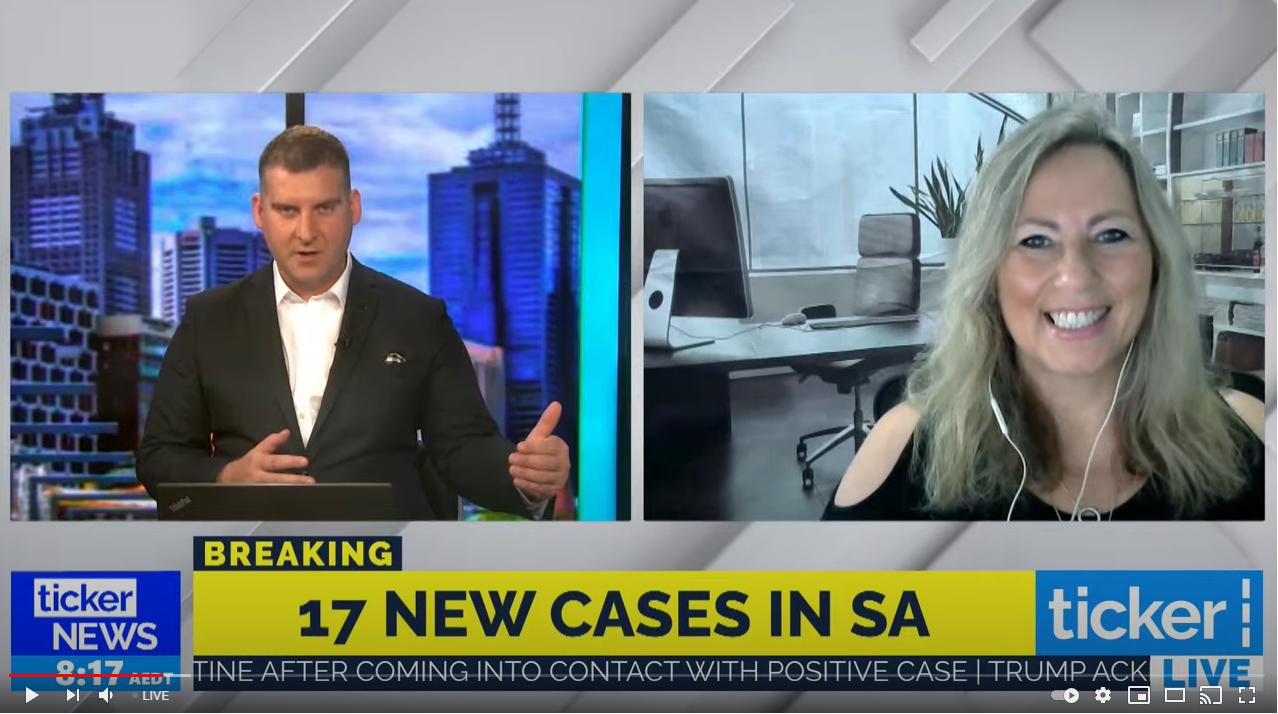 Host:  Ivana Katz designs websites that build businesses. She helps entrepreneurs through the overwhelming online world, but she also knows what it’s like to work through health and other challenges when starting a business.  Ivana survived breast cancer as a single mother as well. And she’s the founder of Websites 4 Small businesses and joins us now. Thanks so much for your time.

Ivana: Hey, so good to see you. Good morning.

Host: Good morning.  Talk to us about overcoming paralysing fear when it comes to public speaking.

Ivana: I was diagnosed with breast cancer four years ago, and shortly after I finished my treatment, I was invited to speak at a business conference. And I was paralysed because I’m a geek, I work in the virtual world.

And I was paralysed at the thought of speaking at a conference.

But I sat down and I wrote down all the problems that I was facing – one of them being chemo brain.   What chemo brain is, in case you haven’t heard of it, is you basically can’t even remember your name. And I was going to have to remember a 45 minute presentation.

And the next thing was I couldn’t stand up for more than five minutes.

And so I wrote down all the problems that I was facing at the time, and then I worked through them one by one.

Host: It’s so true Ivana. And the link between the two of them is quite interesting. So you were at your weakest, of course, recovering from breast cancer treatments and that’s when you started to say I need to deal with public speaking.

Ivana: That’s exactly right. The day that I’ve got clearance from my oncologist is the day that I was asked to do this conference. And I can’t tell you how terrified I was.

Host: I want to ask you about that. Because a lot of people who would go through the cancer treatment process, I would imagine, wouldn’t be fearful of much, even what that takes. So did you kind of utilise that experience to pull yourself together and say, Hey, in the end, it’s public speaking. It’s not life and death.

Ivana: It’s exactly right – you are spot on because what I was thinking, well, if cancer didn’t kill me, public speaking probably won’t either.

Host: I don’t think any people have died from public speaking …

Anyway, now talk to us about why you think most websites fail. And of course, what you can do to try and ensure that it doesn’t happen to you.  First tell us what makes a website fail?

Ivana: In most cases, where I see is that the website owner makes the website about themselves rather than about their customer.

First I wanted to share some numbers, as of now, or maybe year or so ago, there’s 1.8 billion websites online, so you’ve got a lot of competition. And so you have to find a way to stand apart from from your competition.

The other important number to understand is, it takes anywhere between 9 to 14 touch points for people to get to know you like you and trust you. So you have to find ways to engage with them beyond the initial contact.

So if somebody comes to your website, don’t expect that they will engage with you or hire you straight away or even buy your products.

The third number is, you’ve got seven seconds to make an impression on somebody on your website. So if you’ve created a website yourself, and you don’t really know what you’re doing, people will judge you on your web design skills rather than on your business.

Host: Now, the next question I have for you is do you even need a website these days? Because if you’re a video organisation like we are at TickerTV, you could easily go for YouTube and Facebook and Twitter, etc. How important is it to still have your own presence?

I’ve been reading the book by Gabby who started catch.com all those years ago, and he was on eBay and said that the issue that you have by being just on one is that if you don’t own your own platform, you it is up to eBay and they can shut you down or Facebook can shut your page down, if someone makes a complaint. It’s causing chaos.

Ivana: I think it’s important to be on social media. Absolutely. But your website should be the centre of your business universe. And it’s exactly for the reasons you mentioned.

Also look at what happened with MySpace … everybody was using MySpace, and all of a sudden everybody transitioned to Facebook.

And as for Facebook, I mean, as much as I love Facebook, I have found that despite spending thousands of dollars to get people to follow me on Facebook, anytime I put anything out, it’s only 2 to 3% that actually get to see my post.

So you’re not in control of social media platforms and what they do. And if your social profile gets hacked, you might get shut down.

Host: All right. Ivana, I really appreciate your time today.

Ivana: Thank you so much.

Host: Congratulations on your personal growth and transformation as well.